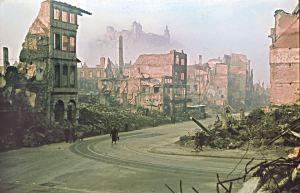 My writing world this week is all scenes of rubble and destruction as I pass day by day through the spring of 1945. Such devastation can weigh the heart down flat. I have to remember, as I visit the pages each day, that the subtitle of my work is The Legacies That Outlast War.

And when I turn to the world around us, humanity continues to make war on itself.

I was reminded that the Red Cross exists at all because the first Nobel-Peace Prize winner, Swiss businessman Henry Dunant, was so overcome by emotion at the sight of the unattended wounded on an Italian battlefield that his subsequent efforts led to both the Red Cross and the Geneva Convention.

So, the very first Nobel Prize, which launched a force for good still present in the world today, began with a response of the heart to what, in a sense, it could find no way to reconcile, so it offered itself in service to healing.

All week, my thoughts have turned to all that ‘Abdu’l-Baha said when he visited the U.S. in 1912, that it’s time for a whole world to understand what the Dalai Lama has summarized in this way:

At the end of a talk, the Dalai Lama was asked: “Why didn’t you fight back against the Chinese?”

He looked down, swung his feet just a bit, then looked back up and said with a gentle smile, “Well, war is obsolete, you know.”

Then, after a few moments, his face grave, he said, “Of course the mind can rationalize fighting back … but the heart, the heart would never understand.

“Then you would be divided in yourself, the heart and the mind, and the war would be inside you.”

And that, indeed, is something the heart will never understand. Perhaps this is what lies at the very heart of the proliferating violence that shocks us so. At its roots is this despairing, hopeless  battle — one that can never be won, by anyone. What the heart most longs for is to be part of a force for good.

Artist Barry Lane and his daughter Jessie have recorded a sweet reminder of where our real power and possibilities lie, even in a shattered world. Hear the song, “Only Love”, from Force Field for Good: https://barrylane.bandcamp.com/track/only-love